A bit more about that Tax Abatement Extension

THURSDAY, JULY 18, 2013
A few weeks ago S.W.I.M. announced the extension and improvement of the NYC green roof tax abatement. I thought I'd go into more detail about changes to the abatement and how it helps you to build a green roof now!

Let's start with a quick summary of the current abatement from S.W.I.M.'s coordinator Rob Crauderueff:

Oh, and don't forget about all that time it takes to jump through those administrative hoops! Crauderueff sites that 3 out of 4 successful applicants spent over 100 hours of staff time on the process.

The abatement required that 80% of the roof must be covered with vegetation one year after application and specifically sited sedum as the go-to filler. Now, don't get me wrong, I think sedum is a beautiful and productive plant, but I stick with the Benjamin Franklin model - everything in moderation. Using pre-grown vegetative mats also increased costs.

Finally, non-profits and affordable housing owners couldn't benefit from the abatement, cutting out an interested and willing population.


The extension does not address all of the problems that Crauderueff and partners suggested, but there are some exciting improvements.

The definition of 'green roof' was expanded to allow for the inclusion of a controlled flow roof drains, specifying that if the depth medium is less than three inches, a controlled flow drain or other preventative drying method can be added.

New native and agricultural plant species were added to the list of "live plants" that can be used to meet the requirement of the 80% vegetation coverage. Opening the abatement up to rooftop farms and plants other than sedum.

The amount of the abatement was increased to $5.23/s.f. beginning July 1, 2014, which actually was just meant to keep the abatement in line with pricing increases, but we'll take it. Also the maximum was raised to $200,000 (up from $100,000), mostly meant to help out the more expensive rooftop farms.


The bill from the state legislature does not mention improving administrative procedures, so our fingers are crossed that some streamlining will happen with the implementation of the extension.

The point of these new incentives is part of a larger green infrastructure program in the city to capture the first ince of rainfall on 10% of the impervious areas in combined sewer watersheds through detention or infiltration techniques. But, because green roofs have so many other sustainability benefits, the abatement is open citywide.

Which makes me think, wouldn't it be great if individuals could register their own tiny improvements as part of the city's goal - registering window boxes, street planters, gardens, and native plants not only for tax credits (one can dream) but also to create a wider community around conservation efforts.

Here's to hoping. If you'd like to get involved, become a member of S.W.I.M. The group just announced their July meeting (Wednesday, July 24) where they'll discuss the Green Roof Tax Abatement in more depth.
share:

A Caterpillar is a Picky Eater 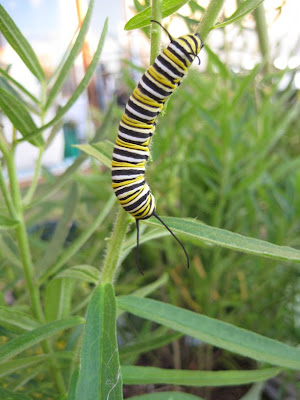 There's a lot of talk about Butterfly Gardens and the flowering plants that provide the nectar for our flying friends, but what about caterpillars? It's not the nectar they crave but the green leaf, and not just any green leaf--caterpillars can be rather picky about their diet. Take, for example, our striped Danaus plexippus or Monarch Buttefly, it spends most of its time feeding on a singular diet of poisonous milkweed, Asclepias tuberosa. This consumption of milkweed builds up in the caterpillars system so as an adult, the Monarch is poisonous to those that eat it – its one defense against predators. Although, Asclepias tuberosa is a stunning native wildflower and the sole larval host for the Monarch Butterfly in it's pupating stage, it's rarely found in gardens, even in some "Butterfly Gardens". What is often in "Butterfly Gardens" is the ubiquitous Butterfly Bush, Buddleia, which attracts many butterflies but doesn't provide a source of food for the young Danaus and is also an invasive exotic. A female Monarch will only lay an egg where it knows it's offspring will find food, therefore Butterfly Weed is crucial to the Monarch population. Here are some images of the Danaus plexippus munching away on the Asclepias we have in our nursery on the roof as well as some of the other natives we have up there like Black Cohosh and thistles. 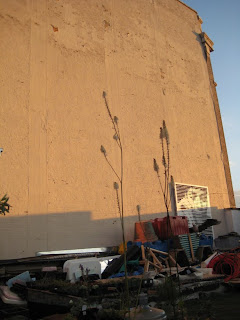 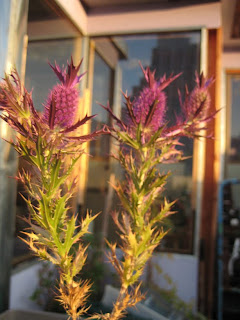 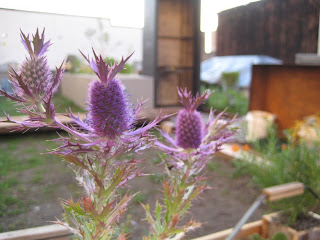 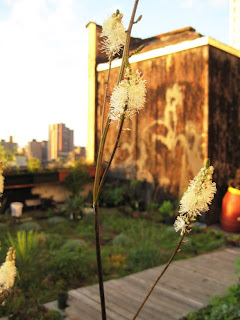 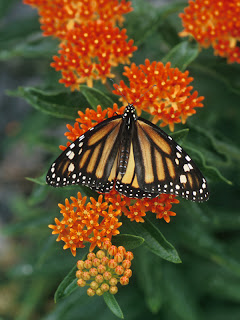 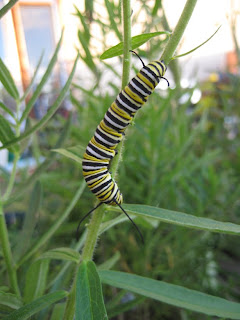 Thank you for your subscription!